Whether your company is planning on migrating from CATIA V5-6 to 3DEXPERIENCE or is in the middle of the process, there are a couple of fundamental differences between the platforms that will ease the transition for you and your company. Dassault Systèmes developed the 3DEXPERIENCE platform to create a Cloud-Based, Data-Driven, and all-in-one PLM experience that better organizes workflows and streamlines development.

If you have done any research, watched promotional videos, or listened to anyone talk about 3DEXPERIENCE, you will have heard the term “Data-Driven” ad nauseam (and for good reason). Most of the benefits that 3DEXPERIENCE has to offer comes from this “Data-Driven” approach. Having the platform set up this way eliminates the need to store data in a file-based format. The data is, instead, stored in a streamable package. 3DEXPERIENCE utilizes a Cloud-Based platform that is set up on a Dassault or on-premise server. These servers will stream data to users according to their access rights that are set by an admin. Users can range from anyone in the internal company, to suppliers, and even customers.

A major advantage of having a Data-Driven platform is that it gives a “single version of the truth”. This means that modified data will be updated across the entire platform in real time. The data is ALWAYS up-to-date. For example, if two designers are modifying different parts within an assembly at the same time, each designer can see the modifications that the other has made without having to close, re-sync, and re-open the assembly. The user needs to simply perform an “Update” command. This also means that whatever data the supplier or manufacturer can access is always the latest. This circumvents the issue of wasted time by having worked on outdated data.

The 3DEXPERIENCE platform creates an environment where nearly every aspect of the project can be managed within the suite. Because the system is cloud-based, the users can connect project data such as benchmarking documents, timelines, open issues, and deliverables to the CAD data/project with an optional drag-and-drop functionality. This connected data can also be tracked and monitored, thus giving managers “invisible governance” over a project. Because the suite is Data-Driven, project managers can track progress and assess development schedules in real time without micro managing their teams.

3DEXPERIENCE is split into two interfaces. Web and Native. The Web Apps are opened through a web browser and gives the user access to Social, Collaborative, and Information Intelligence Apps. The Native Apps include all the 3D design, drafting, rendering, and simulation apps which run from a local computer and require software to be installed. These apps can include CATIA, SIMULIA, DELMIA, and SOLIDWORKS.

The new Data-Driven approach also changes how an assembly is managed. In CATIA V5-6, an assembly was saved as a bulky product file with all the sub-assemblies and child parts within it. However, in 3DEXPERIENCE, there are no assembly files. Instead, the sub-assemblies and child parts are linked to the assembly through logic paths. This is especially useful when the assembly has multiple variations. In V5-6, a unique CATProduct was created for each assembly variation. This could take up large amounts of data as well as become cumbersome to keep track of. With 3DEXPERIENCE, connecting the assemblies with Data-Driven logic paths saves space and simplifies variation management. This also comes in handy when a company works with multiple manufacturing facilities with varying capabilities. 3DEXPERIENCE keeps track of variations based on manufacturing facility as well as providing the capability to include replacements for parts on the BOM/EBOM that may not be available to the facility at the time. Thus, avoiding errors and time delays in production.

The 3DEXPERIENCE Platform enhances BOM/EBOM capability as well. In 3DEXPERIENCE the BOM and 3D data are directly linked. Changes to the 3D data are now immediately reflected in the BOM and vice versa so that BOM errors during development are minimized. The connectivity of 3DEXPERINCE’s platform also gives users the ability to roll-over items in the BOM and have them highlight the associated part(s) in a 3D viewing space.

The Cloud-Based and Data-Driven 3DEXPERIENCE Platform has quite a few noticeable differences from its Client and File-Based predecessor. However, these differences are crucial to improving communication, productivity, and quality output to compete with today’s demanding marketplace. The conversion from CATIA V5-6 may take some getting used to as well as some extra training. Luckily, InFlow Technology offers regular training sessions to turn any novice 3DEXPERIENCE user into an expert in no time. 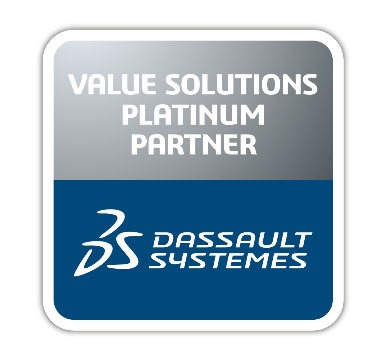 InFlow Technology Recognized by Dassault Systèmes as a Platinum Partner